A DAY IN THE LIFE OF A SUPER

An interview with Duran Jenks, Superintendent by Sara Montuori, Director of Marketing

Superintendent that is, not Superman. However, after spending about 45 minutes with Duran Jenks onsite at one of Epoch’s newest projects, Veere, I got the impression he was part Superintendent and part Superman.  Here’s a peek into what an ‘average’ day is like at an Epoch jobsite.

Blueline, the HVAC company for the project, calls to say he doesn’t have permits, so he can’t start work today. This shouldn’t affect the schedule today, but it will become critical and affect other trades if it runs another two weeks out.

An e-mail comes through from another trade, while there’s a knock at the door from yet a third trade interested in working on the job, not to mention at least 3 separate phone calls have come through within 20 minutes.

All this is happening while being interviewed and the job site is buzzing with trades as they work on Veere, located off Palm Parkway and I-4 in southwest Orlando.

It may not seem obvious at first, but multi-tasking is a key foundation to a successful Super.

Duran has been with Epoch for 4 years and Veere is his 5th project. In fact, he is managing Veere alongside Kestra, as their timelines are only months apart. Note though, that two projects at one time is not the norm. Prior projects include Wiregrass, Pierpont, Maitland and Lakeside Walk, which was the only project he was with from start to finish.

Having two projects at the same time is by far the most challenging Duran shares, however it does allow him to catch any hiccups and adjust from one project to the other. While there’s no true job description, Duran sums it up as best as he can; maintaining a very detailed schedule, creating and answering RFI’s, keeping up with the most current drawings, working with a wide variety of personalities and managing his team of 3.

The schedule is his bible. An excel spreadsheet looks ahead 4 weeks and includes every step and every trade it takes to complete a project. Timing is critical, as there is a trickle effect for any delays that rolls all the way down to move in dates for Residents. Even though Duran spends a lot of time perfecting his schedule, he also spends a lot of time out on the site, as there could be up to 15 trades on the job at one time.

Duran attributes a successful job to a good clean schedule, a strong sitework vendor, reliable sub-contractors and lots of pre-planning to make sure everyone’s on the same page.

On a personal note, Duran has two grown children, Kelly a soon to be graduate from Stetson University and Jacob, a mechanic for Universal Orlando resort, where his wife, LeeAnn, also works. Duran and LeeAnn are celebrating 23 years of marriage this year, love to cruise for vacation and are also Disney annual passholders. 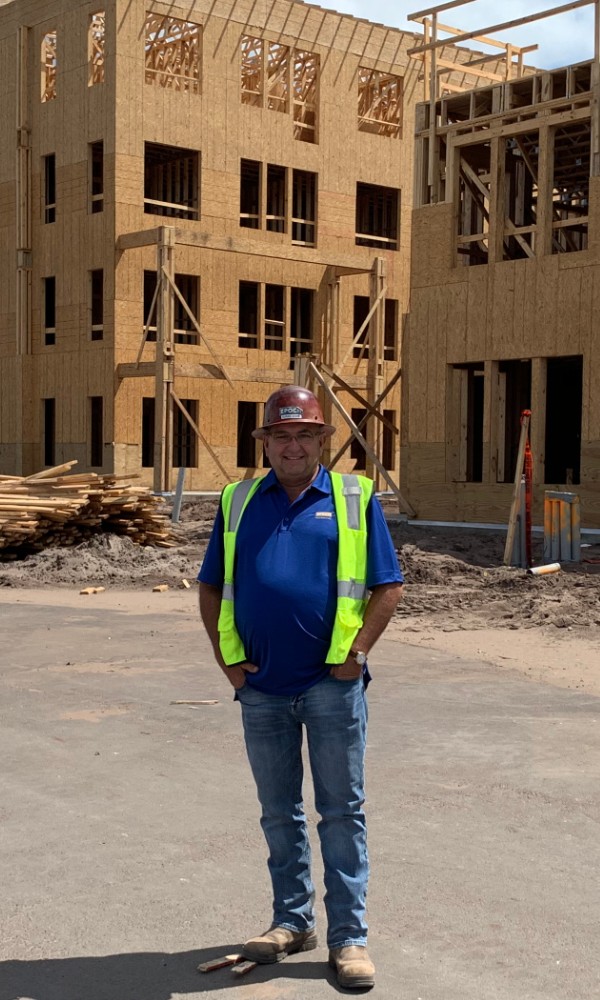