Assistant Superintendent to Project Engineer and Everything in Between

While our company is made up of three distinct departments; development, construction and management, we have a symbiotic relationship and rely on each other from start to finish for a successful project. We wanted to dig a little deeper into the construction department and learn more about two key roles: Assistant Superintendent and Project Engineer.

Johnny celebrated 18 years with Epoch in July 2021. He started his Epoch journey as a Groundskeeper at Key Isle under Dave Lafrance, now our Regional Maintenance Supervisor, and was very ambitious to learn everything he could. This ambitious attitude  led to his promotion to Maintenance Technician.

One of his most challenging tasks at this point in his career was to learn how to properly install an A/C unit! Despite never having done this before, Johnny was up for the challenge and was able to accomplish this with support from his peers and of course the “never give up” attitude.

Johnny’s dedication, customer service skills and intense desire to continue to learn and grow led him to the role of Maintenance Supervisor at Thornton Park in Jacksonville.  Needless to say, when Thornton Park was sold Johnny eagerly wanted to know his next assignment! Look no further – Construction!  His firsthand at construction was punching units at Maitland Station, but his first official project as an Assistant Superintendent was for Kestra.  Johnny continued to serve as an Assistant Superintendent at several of our projects such as Veere, Sonceto, Calirosa Kissimmee and now he is at Calirosa Winter Park.

While no day is typical, Johnny remains focused on assisting the subcontractors on what they may need, ensuring cleanliness and safety onsite and managing inspections. Inspections play a huge role in moving the project forward. On the day of the interview, Johnny had a roof truss inspection and upon passing he would then be able to have insulation installed. Johnny also functions as a liaison between Chris Burdine, Superintendent, Ronnie Pham, Project Manager and the subcontractors onsite.

When asked what his favorite thing is about his job Johnny answered, “Comradery between the team, no one is pointing fingers, (we) all look at each other as equals which incentivizes me to work more, learn more.” Johnny said when he gets home, he checks out ProCore (our Construction Management software) after the workday to get ready for the next day. He is a firm believer that preparation and hard work meets opportunity. And while he’s not quite sure if he wants to be a ‘top guy’ yet, he is eager to keep learning more. “Chris is a great leader and I’m quite happy right where I am”, Johnny said.

Johnny has been married to his wife, Jennie, for almost 11 years and credits her as the glue that holds everything together. They have 3 children; Jordan (13) who is outspoken and opinionated but a good kid, Johnny Jr. (11) a shy genius with straight A’s who likes video games and Journi (6) who Johnny describes as rambunctious.

Ivan is going on three years with Epoch and in that short time has worked on 4 projects: Kestra, Sonceto, Calirosa Kissimmee and now Calirosa Winter Park. As a Project Engineer, Ivan manages the organizational parts of the project, but that’s just the short version. Each day is a little different, which is what Ivan likes about construction, that there is no set routine.

When there is a design issue or something isn’t working, everyone goes to Ivan!  He works with the Project Manager, Superintendent and subcontractors to come up with solutions.  Ivan acts as a liaison between subcontractors and development.  In the afternoons, he typically walks the project, takes photos and uploads them to our construction management software, ProCore.  The key pieces of Ivan’s role include RFIs, submittals, scheduling, securing permits and managing the city building department, which requires developing and maintaining good relationships with the inspectors and city employees.

Ivan has enjoyed all the projects he’s worked on, but more than the projects themselves, it’s the comradery and having a great team that makes it so enjoyable.

When Nicole asked Ivan about his favorite part of his role, Ivan stated, “What I like the most is seeing something go up – the building finishing (and) making progress. Every day something is different.  Every day you can see the progress.  For example, one day we just had slabs – by the end of the day the framing was done for the first floor.” Ivan also loves to be onsite versus in an office. “With every day being different, presenting new challenges, you need to get your eyes on it. Plus, it’s much easier to see it for yourself than have someone explain it to you over the phone”, he says. In turn, you gain more respect and build a rapport with the subcontractors and relationships are key in this industry.

Ivan started his engineering career with roads and bridges for 15 years in Miami, transitioning to buildings and then moved to Orlando with his wife where he started with Epoch. He believes a successful project is made up of a good team, good subcontractors that you can rehire for future projects and building strong relationships.

Of course, not every day is smooth and you have to deal with multiple interruptions, but that makes the day interesting and fun.

We couldn’t help but notice that both Johnny and Ivan mention comradery as not only a key part of making a project and their role a success, but also their favorite part of each and every day. And we also couldn’t help but feel more than a little bit inspired and proud to have such a great group of guys on our construction team. 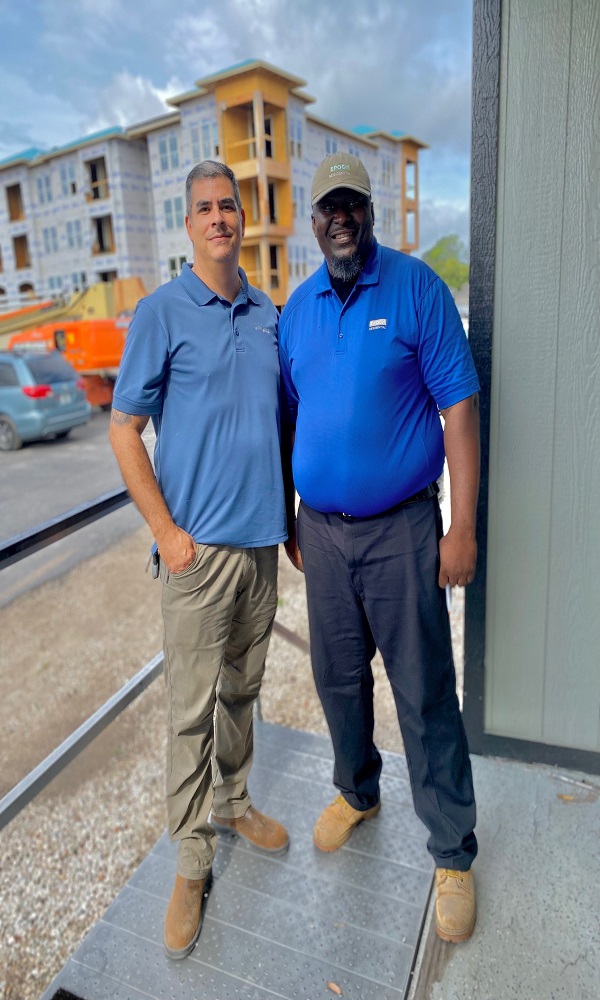